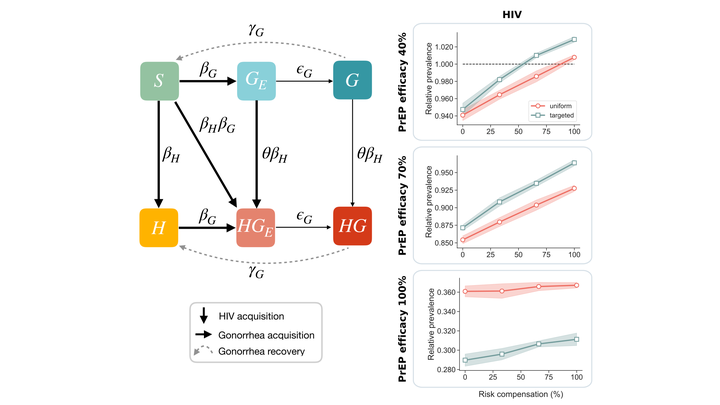 Sexual contacts are the main spreading route of HIV. This puts sex workers at higher risk of infection even in populations where HIV prevalence is moderate or low. Alongside condom use, Pre-Exposure Prophylaxis (PrEP) is an effective tool for sex workers to reduce their risk of HIV acquisition. However, PrEP provides no direct protection against STIs other than HIV, unlike condoms. We use an empirical network of sexual contacts among female sex workers (FSWs) and clients to simulate the spread of HIV and gonorrhea. We then investigate the effect of PrEP adoption and adherence, on both HIV and gonorrhea prevalence. We also study the effect of a potential increase in condomless acts due to lowered risk perception with respect of the no-PrEP scenario (risk compensation). We find that when HIV is the only one circulating, PrEP is effective in reducing HIV prevalence, even with high risk compensation. Instead, the complex interplay between the two diseases shows that different levels of risk compensations require different intervention strategies. Finally, we find that providing PrEP only to the most active FSWs is less effective than uniform PrEP adoption. Our work shows that the effects emerging from the complex interactions between these diseases and the available prophylactic measures need to be accounted for, to devise effective intervention strategies.