Out in Nature Communications!

Our Simplicial models of social contagion is now published 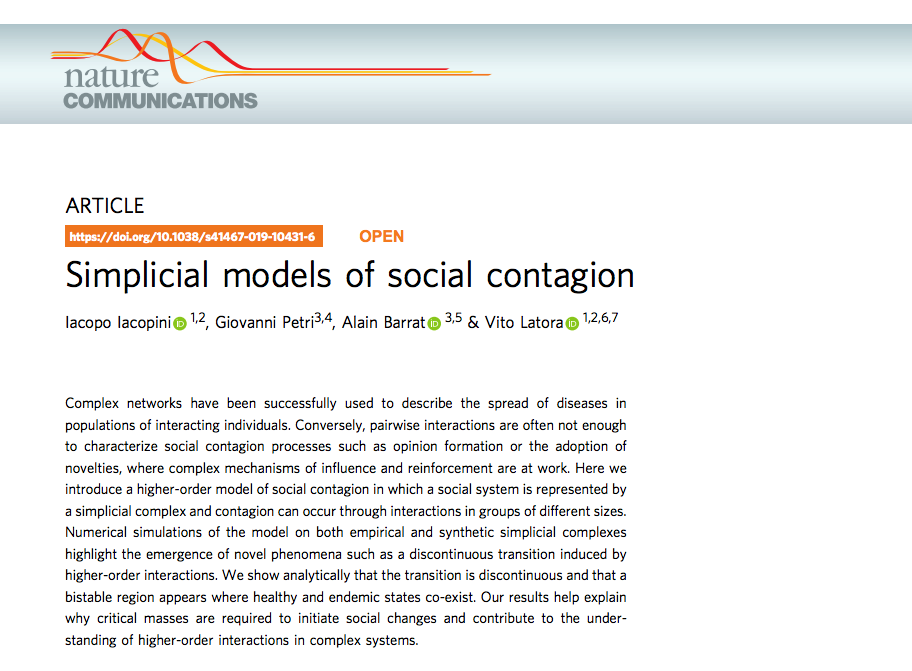 Networks have been extensively used to describe the connectivity patterns of complex systems of various nature. In particular, they have been used to represent the social structure on which dynamical processes, such as the spreading of diseases or the formation of opinions, occur in a population. However, recent empirical results have shown that the dynamics of social contagion may significantly differ from the those describing the spreading of biological diseases. In fact, the transmission of a biological virus happens through pairwise interactions between the individuals of a population, so it can be well modelled as a spreading process over the links of the underlying network. Contrarily, pairwise interactions are often not enough to characterize the mechanisms behind social contagion processes such as, for instance, the diffusion of opinions or the adoption of norms, where more complex dynamics of peer influence and social reinforcement take place.

In this work, we introduce the Simplicial Contagion Model (SCM), a novel higher-order modelling framework of social contagion. In the SCM, the structure of a social system is represented as a simplicial complex, and different channels of infections, with different transmission rates, are considered depending on the fact that a contagion can occur on a link (two-body interaction) or is due to a group interaction. Differently from standard networks, simplicial complexes are indeed able to describe in a unified manner not only pairwise but also group interactions of higher-order, by extending the network concept of links between two units to the one of simplices, encoding relations between any number of units. By taking into account these high order interactions between individuals, our model extends the idea of complex contagion by considering not only multiple but also collective exposures.

We find that the inclusion of the lowest higer-order interactions is already enough to change the nature of the spreading process from continuous to discontinuous. Through extensive numerical simulations on both empirical data and synthetic simplicial complexes we identify the regions of the parameter space where we observe bi-stability in the asymptotic density of infectious, with a co-existence of an healthy and an endemic state. We further investigate this phenomena by deriving a mean field equation for the evolution of density of infected nodes, showing that the steady-state dynamics, the position, and the nature of the transition can be predicted analytically.

Check it out here!

Next
On the arXiv after 72h!
Previous
New paper out!