On the dual nature of adoption processes in complex networks 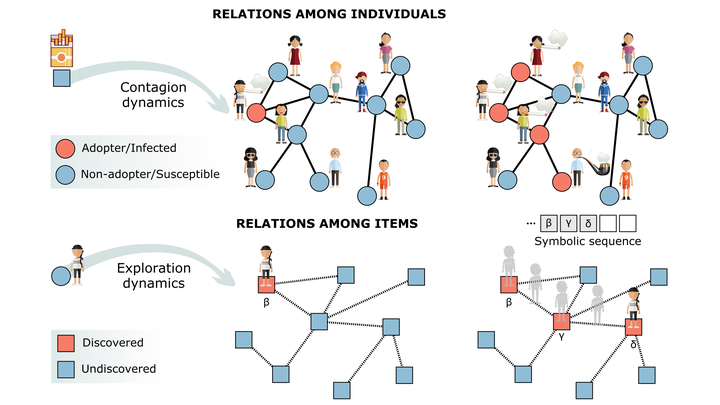 Adoption processes in socio-technological systems have been widely studied both empirically and theoretically. The way in which social norms, behaviors, and even items such as books, music or other commercial or technological product spread in a population is usually modeled as a process of social contagion in which the agents of a social system can infect their neighbors on the underlying network of social contacts. More recently, various models have also been proposed to reproduce the typical dynamics of a process of discovery, in which an agent explores a space of relations between ideas or items in search for novelties. In both types of processes, the structure of the underlying networks, respectively the network of social contacts in the first case, and the network of relations among items in the second one, plays a fundamental role. However, the two processes have been traditionally seen and studied independently. Here, we provide a brief overview of the existing models of social spreading and exploration and of the latest advancements in both directions. We propose to look at them as two complementary aspects of the same adoption process: on one hand there are items spreading over a social network of individuals influencing each others, on the other hand individuals explore a network of similarities among items to adopt. The two-fold nature of the approach proposed opens up new stimulating challenges for the scientific community of network and data scientists. We conclude by outlining some possible directions that we believe may be relevant to explore in the coming years.