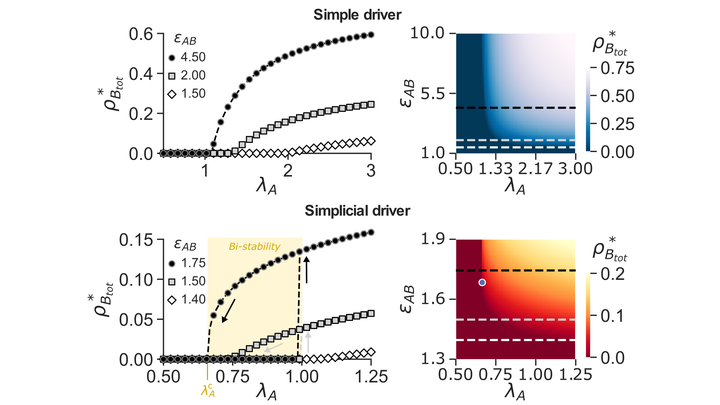 Single contagion processes are known to display a continuous transition from an epidemic-free phase at low contagion rates to the epidemic state for rates above a critical threshold. This transition can become discontinuous when two simple contagion processes are coupled in a bi-directional symmetric way. However, in many cases, the coupling is not symmetric and the processes can be of a different nature. For example, social behaviors—such as hand-washing or mask-wearing—can affect the spread of a disease, and their adoption dynamics via social reinforcement mechanisms are better described by complex contagion models, rather than by the simple contagion paradigm, which is more appropriate for disease spreading phenomena. Motivated by this example, we consider a simplicial contagion (describing the adoption of a behavior) that uni-directionally drives a simple contagion (describing a disease propagation). We show that, above a critical driving strength, such driven simple contagion can exhibit both discontinuous transitions and bi-stability, which are instead absent in standard simple contagions. We provide a mean-field analytical description of the phase diagram of the system, and complement the results with Markov-chain simulations. Our results provide a novel route for a simple contagion process to display the phenomenology of a higher-order contagion, through a driving mechanism that may be hidden or unobservable in many practical instances.